Michigan Day at the Capitol

You are here:
Michigan Day at the Capitol

Recognition of the MIRA Retailer as a Beacon of Hope for a Community. 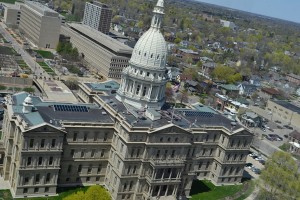 Zealous advocacy and leadership were the hallmarks of the annual MIRA “Day at the Capitol” in Lansing. Simply put, the day was a huge success.  Over 150 MIRA members, guests and legislators attended the event.  MIRA members were strong advocates on behalf of the issues most affecting their retail stores, and the many elected officials, including a majority of  the Michigan Senate and House leadership, were attentive listeners.

The MIRA members enthusiastically advocated the Board’s 2012 legislative priorities to their elected legislators. They stressed the importance of replacing the bottle law with a statewide, comprehensive recycling plan, as well as supporting community safety, responsibility and accountability in any proposed legislative changes in Michigan’s alcohol regulations and laws.

The key legislators who will decide what proposed laws are even considered for a vote were all in attendance. Both Chairs of the Senate and House Regulatory Reform Committees (Senator Tory Rocca and Representative Hugh Crawford) addressed the crowd. The Chairs of the Senate and House Appropriations Committees (Senator Kahn and Representative Moss) were represented and received the MIRA listing of legislative priorities.  Senate majority leader – Randy Richardville, a longtime MIRA friend – was the keynote and spoke earnestly to the Board and membership concerning his attempts to create an environment favorable to small business growth. He sincerely thanked the MIRA for all their work in the communities they serve. Senator Richardville also advised the members that the Senate voted (with MIRA approval) to eliminate the Personal Property Tax- an onerous tax affecting businesses paying tax on industrial equipment.  Majority Floor Leader Jim Stamas was in attendance on behalf of the House leadership, and answered many questions presented by our retailers.

One of the afternoon’s highlights included a testimonial of sorts by long time MIRA supporter Senator Morris Hood III. Senator Hood highlighted the work of our MIRA retailers as the “true hope of a neighborhood” in providing employment to the people of the community where their stores are located. In a poignant moment, Senator Hood thanked former MIRA Chairman and Detroit Grocer-Jim Hooks-who hired a very young Morris Hood III, several years back as a grocery bagger and stock employee. Recognizing Hooks and all MIRA retailers as the central employer’s in their neighborhoods-Hood acknowledged that many people, including himself, may never have succeeded  without the opportunity and confidence offered by an MIRA retailer.

Senator Hoods’ testimonial capped a great MIRA Michigan-Day at The Capitol. With hard work and continued advocacy by the MIRA, there is great hope that many of our legislative goals and priorities can be accomplished in completion of a successful 2012.

We have benefited a lot from MIRA, they have helped us out in many ways.  We use the coupon program a lot, and we use the insurance program

Quite honestly, MIRA does such a fine job meeting our needs. What I love the most is that when we have a question, they are always ready to answer it or get back to us very quickly.

The industry has been good to me, and I want to help others have the same success.” “United we stand, divided we fall. Our industry is only as good as the weakest link, so stronger members mean a stronger industry.

Since we had our stores in Detroit, it was the thing to do. All store owners understood the value MIRA brought for a grocery store. Today at Market Basket of Franklin, the Nestle rebate program is great for us. Also, the DTE program is our best saver – we receive free pull-down shields to cover our dairy and produce – it, has helped our refrigeration and, has allowed us to save money on electricity costs.

Auday is a great guy, who listens to suggestions and is very open.  MIRA hears people, which is key.  If you have a question or suggestion, they listen and try to do something about it.

We have a very strong working relationship and alliance with MIRA.  We serve many of the same customers/members, and we’re working very closely together to make sure Money Service Businesses have fair access to financial services.