Veteran’s Day is a day of remembrance for the men and women who put their lives on the line for liberty and justice.  Benchmark Beverage company salutes the American spirit with two U.S.-made products that honors our Veterans.  Leadslingers and Gold Star are Veteran-owned companies that are dedicated to producing fine spirits that pay tribute to our fighting heroes.

Leadslingers’ Whiskey is produced by seven combat veterans, from the US Army Rangers, USAF TACP, Special Forces, and 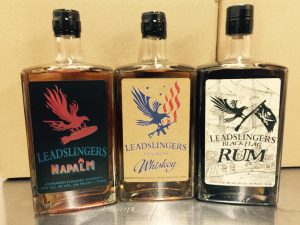 Paratrooper communities. Their love for America and fine whiskey, is what the company is all about.

They wanted to craft a whiskey that was enjoyable and unrepentantly supported the Second Amendment. By remaining active in their civilian and military communities, Leadslingers’ strives to set an example.

Leadslingers Bourbon Whiskey brings a light bourbon flavor from its single barrel aging process.  Double distilled and hand crafted in Moore, Oklahoma, this small batch whiskey melds sophistication and down home flavors.  Delivering hints of oak, toffee and vanilla, it’s sure to satisfy even the most distinguishing taster.  Leadslingers Napalm is a true cinnamon whiskey, while the Black Flag Rum is sure to make other rums walk the plank.

Gold Star Vodka is a proud American made premium spirit distilled in North Charleston, South Carolina.  It is a values based, Veteran owned brand, which was founded on the premise of loyalty, integrity and service.

Gold Star was created in order to give back to the families, who lost a loved one in the armed forces while serving in the global war on terrorism, and to Veterans who came home with the physical and emotional scars of that war. $2 from the sale of each bottle, goes to these truly worthy causes.

This ultra smooth, 80 proof grain based vodka spirit is produced through an award winning patented process, designed to remove the impurities left behind in other well-known brands. The results are phenomenal and the taste is unmatchable.

Gold Star Vodka believes that fine spirits should be approachable and a unifier of people with the common ground of drive, honor, and respect. It also believes that it should help those in need who have also lived by those principles.

It is important to give back to our great industry by doing everything possible to improve the overall well-being of MIRA members.”

“There is strength in numbers. In 2011, the retail environment will change very quickly, and it is critical that MIRA grows stronger in every aspect of our businesses.

We would like to continue to grow with MIRA.  I can’t imagine any business not needing a sign, and MIRA represents businesses.  They are an amazing organization and they’re good to work with.

The MIRA Bottom Line magazine is a great publication to see whats going on in the industry.  We try to keep up with all the trends.

As MIRA gains more members, we become stronger, and this results in more legislators listening to our voice regarding issues that affect our businesses.