NACS State of the Industry Summit data reveals that foodservice sales accounted for 22.5% of in-store sales in 2017

“Foodservice is our industry’s biggest opportunity,” said NACS Research Committee member Alan Beach (formerly of 7-Eleven Inc.) while revealing the industry’s 2017 benchmarks at the NACS State of the Industry Summit.

In-store growth in 2017 was powered by foodservice, a broad category that mostly includes prepared food (69% of both category sales and profits) but also commissary foods and hot, cold and frozen dispensed beverages. Foodservice accounted for 22.5% of in-store sales and 33.9% of gross profit dollars. The category also was the biggest differentiator in terms of profits: top-quartile performers had prepared food sales that were 3.6 times greater than bottom-quartile stores; coffee sales at top performers were 5.2 times greater that than those of the bottom quartile. 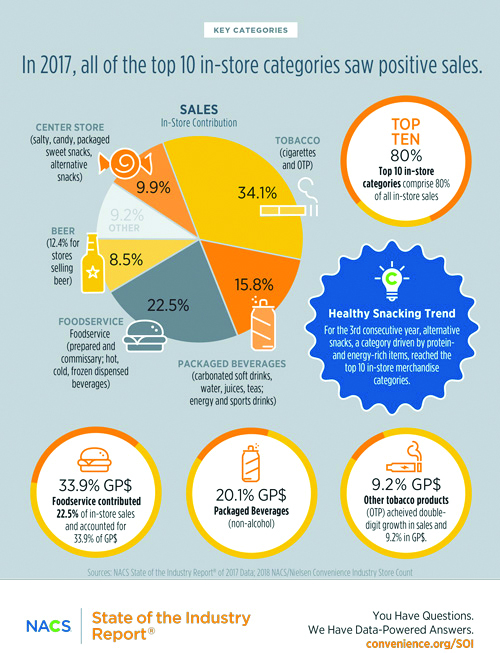 Snacking categories all had sales growth, as salty snacks (up 5.6%), candy (up 2.6%) and alternative snacks (up 2.0%) all had strong growth as some consumers, especially millennials, moved toward snacking and away from traditional meals. This was the second consecutive year that alternative snacks, a category driven by protein- and energy-rich items, reached the top 10 in-store merchandise categories, signaling a growing desire by consumers for immediate/healthier snacking options.

For more a complete analysis on retail fueling at convenience stores, pre-order your copyof the NACS State of the Industry Report of 2017 Data. Available in June, the report is the convenience and fuel retailing industry’s premier benchmarking tool—delivering insightful, useful information about the industry to retailers maximize their effectiveness and profitability.

Americans Heating Outdoor Spaces Have Fired Up Propane Prices
February 15, 2021
Everyone Wants Sushi to Go, and It’s Saving Some Restaurants
February 9, 2021
Some Holiday Hams Might Be Harder to Find. Blame Covid-19.
December 28, 2020
Consumer Advisory: MDARD Issues Stop-Use Order for Bamboo Hand Sanitizers
December 21, 2020
Your Boss Can Restrict Your Holiday Plans in the Pandemic
December 7, 2020
The Covid Risks in the Workplace Break Room
December 7, 2020

MIRA is a great association; if you need health insurance you can get it from them.  They also do a lot of networking and I have found business that I can deal with through them.  I suggest that every small business join them.  They help more that other associations; joining definitely wouldn’t hurt.

MIRA is very instrumental in trying to partner with vendors in trying to get better protection on pricing in as many ways as they can.

We get better deals thanks to MIRA. We get the rebates with the coupons, and we can send them directly to them instead of sending to each manufacturer. It’s easy to send them to one place, and that is it. That really helps us save a lot of time.  They also help us with the Dairymens Milk Company, and we get the special price, too. That is very nice.

I serve on the board to help out where I can, stay involved, and be a part of the success of our industry.”

“We need to promote membership so that the MIRA can prosper, and so that retailers are on the same page. Membership makes us stronger.

This is my industry and MIRA serves this industry. I like being part of a successful organization and being involved in change and influencing new laws.”

“Without MIRA, who will fight for the retailer in Michigan and Ohio? MIRA is the voice for all retailers, and more numbers means a stronger voice. If more of us support MIRA and keep it successful, we will be able to fight more effectively.