Every year, the Midwest Independent Retailers Foundation Turkey Drive Committee pledges to put a turkey on the Thanksgiving table of more than 6,000 families throughout Michigan, Ohio and Illinois that may not otherwise enjoy this special meal.

Since 1980, the Midwest Independent Retailers Foundation and its members have provided thanksgiving turkeys to needy families and each year the list of charitable groups asking for turkeys grows. There are more requests than we could ever fill. We need your help!

Thanksgiving is a time to reflect, give thanks, and help those who are less fortunate. We are asking you to pitch in. A $300 donation to the Midwest Independent Retailers Foundation Turkey Drive will provide turkeys for 20 families. When you consider that each turkey serves about 12 people, that equals enough Thanksgiving turkey for 240 people. You can also donate food items (canned, boxed or bottled) or other products such as clothing or household items, above and beyond – or in lieu of – your monetary donation.

This is a charitable event and all donations are tax deductible! Please see your tax advisor for guidance on your specific tax situation. Receipt available upon request.

It is truly heartwarming to be a part of our Annual Turkey Drive.  To donate, please click the “Donate Now” link above or click here for a mail-in donation form.

Dozens of volunteers met on a brisk November morning to give away mounds of food.

Last year, the COVID-19 pandemic left MIRA hanging. Usually, companies like DTE and Blue Cross send more than a dozen volunteers each, but because of strict COVID-19 policies, they had to avoid the event altogether.

This year, DTE came back, though it required all of its volunteers, who numbered around 20, to wear masks, use gloves, and have access to hand sanitizer.

Not everyone there was sent by corporate. Many volunteers came directly from food companies, like Jamie Steinman, who represents Prairie Farms.

Holly Francis, another volunteer, doesn’t do any business with food. She works for a payroll service called ConnectPay, which made a cash donation to the drive.

Ed Weglarz, MIRA President and CEO, was there to supervise the handing-out of turkeys and the rest of the food. He was in high spirits, he said, because the event was going so well and serving so many people.

The drive does not directly service those in need. Instead, it offers free food to organizations like churches, foundations, nonprofits, senior centers, city halls, medical facilities, and even a police department. Those organizations then connect with needy families and pass the food on.

Though they got their volunteers back, in general, food was in short supply this year. Ken Schulte, MIRA director of business development and vendor programs, said many businesses had to donate less food this year or couldn’t donate at all.

“Donations were on the lower end this year because of supply and demand issues,” he said. “That is the biggest difference between this year and last.”

Frito-Lay, for example, used to donate tons of palates full of chips. This year, they were nowhere to be found, and MIRA simply couldn’t make up for it.

On the upside, Schulte said, MIRA had no trouble collecting monetary donations or acquiring turkeys this year. In fact, it was easier to get money this year than in the past.

In total, MIRA gave away nearly 6,000 turkeys to 70 different organizations. There’s always more to do, though, as they say there’s a long waitlist of people who they can’t give food to.

In Ohio, MIRA gave away 400 Turkeys. The effort was led by board member Paul Elhindi. The Turkey Drive in Ohio was very successful,” said Elhindi. “Wayne Dawson from Channel 8 Morning Show was on site helping and Channel 8 did a story.”

Schulte gave a special thanks to Sherwood Food Distributors for delivering all the turkeys for free. Without the company, he said, they might not be able to pull it off. “They give us their trucks, their gas, their drivers,” he said.

“It’s just a great event. This is probably one of the most heartfelt events,” he said. “This isn’t a gala. It’s not a golf outing. We’re helping people, and that’s what makes this event stand out.” 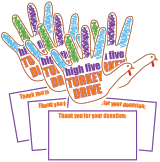 Help us raise money at your registers and give back to the charity of your choice!

Your business can generate a significant donation for Midwest Independent Retailers Foundation’s Annual High Five Turkey Drive by participating in our paper turkey program! Paper turkeys are a fun, simple way to raise funds while sending a message to your customers and the community that you care about feeding the hungry. Best of all, 100% of the money you raise will go toward purchasing turkeys for a charity of your choice!

If your business is interested in selling the High Five Paper Turkeys to benefit the MIRA High Five Turkey Drive, please complete this form and fax to (248) 671-9610 or call MIRA at (800) 666-6233 and we will mail you a starter packet!

To make a donation without participating in the Turkey Hands Program, click here.

It’s very important to be part of the industry you serve. MIRA is an important organization and being part of a great team gives us the voice to fight for what we believe in and the power to know we are being treated fairly.”

“Unity is our strength, and the more members we have, the stronger we become.

MIRA did a great job on the food stamp initiative in 2010, and I’m grateful for that. However, we’re not done, and more than the next couple of years, I want to see payments released to food stamp recipients bimonthly.”

“As one strong voice, we can support initiatives that will enable us to compete with national chains such as Walmart, Kroger, and 7-Eleven or fight legislation that will hurt us.

MIRA sources things we don’t, like insurance, and that gives us an opportunity to present those resources and services to new customers.

MIRA does a really good job at keeping us abreast of big issues for retailers. Item pricing, for example, saved us a ton of money, and MIRA also helped get rid of Michigan’s MBT tax,” “MIRA is truly the voice of our industry!

MIRA is constantly fighting for retailer rights.  They have a voice in Lansing and are there for any questions or peoblems retailers might have.

There is strength in numbers and higher membership makes a good impression. Legislators and lobbyists will listen to an organization with 4,000 members.