This is what grocery shoppers value the most 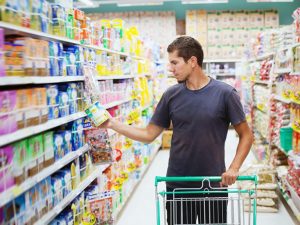 Fresh produce comes out on top as the most important feature to customers in their grocery store experience.

That’s according to a new report by Acosta, a full-service sales and marketing agency in the CPG Industry, in which fresh produce (89%) ranked as a more important feature than competitive pricing (86%) and product selection (84%).

The report, The Revolution of Grocery Shopping, highlights five megatrends impacting grocery, including the important role fresh produce plays in shoppers’ perception of a store. Nearly one-third of shoppers report their perception of a store skews negatively if it does not have a dedicated section for natural or organic options.

In addition, almost half of shoppers consider leaving a store if fresh produce and healthy options are not available.

Another trend is convenient meal solutions, which are becoming a staple for shoppers who are managing increasingly busy lives and abandoning traditional meal rituals, according to the report. It found that half of shoppers decide what’s for dinner within two hours of mealtime. Millennials are doing the least amount of meal planning with 68% waiting until a few hours before dinner to make plans.

The other trends are centered around the following:

MILLENNIALS
72%of millennials enjoy grocery shopping versus just 60% of total U.S. shoppers. Nearly half of Millennials — representing more than 10% of all U.S. shoppers — said they would use an app allowing them to pay for their groceries, signaling the increased integration of digital technology into the path to purchase.

DIGITAL ADOPTION
Nearly one-third of shoppers say they would use various forms of digital technology if it were offered at their grocery store. The most desired offering shoppers would like to see is an app that provides the ability to order items not available in store and the ability to scan items as they shop in order to bypass checkout.

36% of shoppers are interested in using an app or web portal to pre-order prepared foods they can pick up at the store. And more than 40% of shoppers report buying grocery purchases online at least once a month.

PERIMETER GROWTH
While center store accounts for 70% of a store’s profit, the perimeter area is expanding its share of space, driven by the increased interest in health-and-wellness as well as millennials’ influence. 62% of shoppers frequent the produce aisle and 61% visit the dairy section at least once a week, versus only 19% shopping in the HBC aisles at least once a week.

“In isolation and especially when combined, these megatrends are driving the future of grocery shopping,” said Colin Stewart, senior VP. “It’s critical, however, that CPG retailers and manufacturers fully analyze these trends in the context of their own business and customers. With everything from advanced payment and loyalty technologies, in-store navigational apps and digital grocery tools, and even shelf-stocking robots.

Supreme Court to Weigh Vaccine Requirements for the Workplace
January 10, 2022
MIRA asking to suspend Bottle Returns at stores due to the Coronavirus
March 14, 2020

Not everyone realizes how important MIRA is or how it benefits their business.”

“There are many intangible assets for each member’s business from work MIRA does behind the scenes in Lansing, Columbus, and Washington on issues that affect all of us. As we gain more members, our voice becomes stronger.

I strongly recumbent MIRA to anyone whose business fits the MIRA criteria.  They are our eyes and ears in Lansing. They keep us current with laws and legislation.  Many rebate programs for members can add up quickly.

It’s rewarding to be part of an organization that is trying to pool resources to compete with the chain stores, such as the programs that have been endorsed by our committees. They help bring in savings with companies that otherwise would never have been presented.” “With more voices comes more success, because the stronger in numbers and participation in our organization, the more viable we become with politicians in our states to bring about positive legislation for our industry, as well as having more leverage in the vendor community to help make us more competitive and profitable.

MIRA helps me. I was initially attracted by the Chase Paymentech program, but truly appreciate the association’s expertise and information. I’ve found so much info in the Bottom Line publication that is useful, or helpful, and that has taught us something to pay attention to.”  “The magazine has been fabulous; it’s totally saved me a few times.

MIRA is the strongest organization we have in the area to help independent food retailers compete and level the playing field against our corporate competitors as well as having our voices heard in government.”

“Promoting membership to MIRA makes the organization stronger, which generates more influence in the marketplace as well as with the government. As retailers, we can accomplish a great deal more as a team than as individuals.