Abraham was born in a small village in Lebanon. Like many immigrants, he and his mother crossed the Atlantic in 1921, landing at Ellis Island. His father, Sleyman, had already been in this country for several years, traveling back and forth to his homeland and establishing a home and work in Kansas. 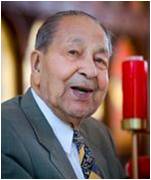 Several years later, the family moved to Grand Rapids, Mich., to be closer to family, where Sleyman established a small retail candy and “five-and-dime” store. The business developed into a wholesale company, selling to retailers in the city.

At the age of 16, Abe Abraham joined his father in business, and 10 years later, his brothers James and Wade began to work in the family business. World War II took Abe to India, where he served in a military courier service. In 1947, he met and married Adele Kaleel, from a small Illinois town, Spring Valley. Together they have four children, 10 grandchildren and one great grandchild on the way.

Abe and his brothers built their business on servicing the customer. Today, MIRA-member SAS distributes 12,000 items to 3,600 customers in nine states from two distribution centers. Customer focus has always been a core value of SAS, enabling it to grow and prosper over the last 85 years. Abe’s vision and wisdom is still a dominant part of the SAS culture, according to the company. Abraham is well known in industry circles for his love of cigars. At age 100, he is still smoking three to four Macanudos a day. (CSP Daily News: www.cspnet.com)

MIRA is a valuable resource for retail businesses.  As a member, we have been kept abreast of government and industry relations that impact our business, both now and in the future.  MIRA also serves by answering our questions and educating our team on new regulations and guidelines.

Before, MIRA was all about donations.  After Auday (arabo) took over (as President) though, the programs and organization improved tremendously.  It’s all about helping the people and not just asking your members for donations.

MIRA is a great association; if you need health insurance you can get it from them.  They also do a lot of networking and I have found business that I can deal with through them.  I suggest that every small business join them.  They help more that other associations; joining definitely wouldn’t hurt.

MIRA sources things we don’t, like insurance, and that gives us an opportunity to present those resources and services to new customers.