Posted by Terrie // the shelby report 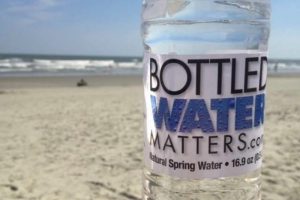 BMC now indicates that bottled water is poised to overtake carbonated soft drinks as America’s largest beverage category by volume by 2017, if not by the end of 2016.

Reflecting a clear trend of consumers increasingly choosing bottled water, BMC reported that by 2015, bottled water had achieved a new volume record with almost 3 billion more gallons than in 2007.

For soft drinks, 2015 was the 11th consecutive year of declining volume.

“There are many attributes that contribute to bottled water’s undeniable appeal to U.S. consumers,” said Chris Hogan, IBWA VP of communications. “Among them are bottled water’s healthfulness, convenience, reliability and safety.”

U.S. Food and Drug Administration (FDA) regulations governing the safety and quality of bottled water must, by law, be as stringent as the Environmental Protection Agency (EPA) standards for tap water.

MIRA is a great organization – no doubt about it.  It’s worth every penny.  Even if you don’t participate in every program that they have – and they have a ton of them  – you’re going to get your money’s worth.  It’s a great value.

Cardwell says the Ohio CAT tax is the biggest issue facing gasoline retailers. “This tax must be moved to the rack to create an even playing field,” “I credit MIRA with working tirelessly to make state government aware of this issue.

MIRA is a good organization, very community focused,”  “The biggest benefit is the government relations interface. They lobby for all of us and work for our rights on issues like federal and state taxes,” “MIRA was behind the initiative to spread food stamps out across the month, which has been very helpful, and they are working hard on the bottle recycling issue, which is painful and expensive for retailers to maintain. We couldn’t do it alone.

MIRA helps us have a larger voice in the government as it relates to the food industry.  We have connections with many city leaders and hopefully that helps us compete with the big businesses that are moving into Detroit because of tax incentives.

MIRA did a great job on the food stamp initiative in 2010, and I’m grateful for that. However, we’re not done, and more than the next couple of years, I want to see payments released to food stamp recipients bimonthly.”

“As one strong voice, we can support initiatives that will enable us to compete with national chains such as Walmart, Kroger, and 7-Eleven or fight legislation that will hurt us.

There is strength in numbers and higher membership makes a good impression. Legislators and lobbyists will listen to an organization with 4,000 members.