West Bloomfield, MI (July 1, 2016) — When Harvey L. Weisberg served as the Chairman of the AFD in 1969 he was quoted as saying, “One of the main reasons for tremendous progress made by the AFD is that the association has been quick to accept the challenge of change taking place in our respective communities around the nation and in our industry in particular.” 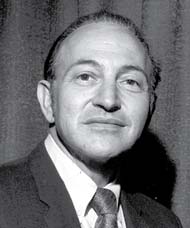 Harvey Weisberg, former executive at Chatham Super Markets and former board member of the Associated Food Dealers (AFD), died on June 25. He was 94 years old.

The Chatham Supermarket chain, now-defunct, was once headquartered in southeastern Michigan, United States.

Founded by Royal Supermarkets in the mid-1950s, Chatham was often compared to Kroger in size and selection. Typical of many grocery stores of its time, Chatham was unable to keep up with big-box grocery competitors, including Michigan-based Meijer. Kroger subsequently purchased former Chatham locations after the chain went out of business.

“Harvey was very active in the food distribution industry, being involved in Super Market Institute and later in the Western Michigan food program, ” said Ed Deeb, former AFD president now head of the MI Youth Foundation. “The food chain was founded by Weisberg’s father, Peter, who then turned the managements to his sons Bernard, Alvin, Harold and son-in-law George Feinberg. Under the direction of Weisberg and Ed Deeb, the association began attracting local food chains.”

MIRA has a rich and deep 106 year history. “Mr. Weisberg was a big part of our history for decades and we are saddened by his passing,” said Auday Arabo, president and CEO.  “Chathams was a great independent chain and a number of people who grew up working for Chathams have played major roles in the grocery industry in Michigan.”

These people included President of SpartanNash, Mr. Dennis Edison and the Director of the Food Marketing Program at Western Michigan University, Mr. Frank Gambino and Mike Moore, the main grocery buyer for D & B Grocers just to name and few.  “Harvey’s legacy in the grocery industry lives on,” said Arabo.

Employees of the Chatham Food Centers are hosting a reunion this summer on August 21 at the Veterans Memorial Park in Warren.  To find out more go to http://www.connellcreationsunlimited.com/Chatham/

Formula and Shortage: Third Expansion of Temporary Choices for Powder Formula
May 31, 2022

As a member, we receive better prices on wholesale pricing.  MIRA allows me to buy more and sell more product every quarter.  I also receive a rebate check from MIRA each quarter.

This is my industry and MIRA serves this industry. I like being part of a successful organization and being involved in change and influencing new laws.”

“Without MIRA, who will fight for the retailer in Michigan and Ohio? MIRA is the voice for all retailers, and more numbers means a stronger voice. If more of us support MIRA and keep it successful, we will be able to fight more effectively.

MIRA is very instrumental in trying to partner with vendors in trying to get better protection on pricing in as many ways as they can.

I believe in the effectiveness and spirit of the staff and members of this organization. I recommend that all members read the MIRA mission statement to get a sense of how important it is for everyone to promote membership.